Improving quality of life of patients around the world

The corporate philosophy of Kyowa Kirin, which conducts the Kirin Group’s medical business, is to contribute to the health and well-being of people around the world by creating new value through the pursuit of advances in life sciences and technologies. Under this philosophy,we are focusing research and development efforts on the four key areas of nephrology,oncology, immunology/allergy, and the central nervous system leveraging our cutting-edge biotechnology anchored in antibody technology.
One recent example of our R&D achievements is the development of burosumab (developed with the code name KRN23) as a treatment for X-linked hypophosphatemia (XLH). The drug was approved in 2018 by the European Commission and the Food and Drug Administration of the United States, where it is sold under the name of Crysvita.

Crysvita, otherwise known as KRN23 or burosumab, was approved for sale as a treatment for XLH in the United States and a part of Europe in 2018.
X-Linked hypophosphatemia is a disease that causes the kidney to waste phosphate and vitamin D needed to maintain and grow bones. Although relatively rare, occurring in one in 20,000 individuals, people with XLH often suffer from deficient growth development.
Existing treatments for XLH mainly focused on supplementing phosphate and Vitamin D, but this still requires taking multiple daily medicines and has the side effect of kidney calcification. Treatment with KRN23 vastly improves the quality of life of XLH patients. With one injection every two or four weeks, KRN23 raises and maintains blood phosphorous levels in a normal range, supports improved bone growth, reduces pain, and improves bodily functions.

When I was researching bone metabolism in the Pharmaceutical Laboratory, Kirin Brewery, I turned my focus to phosphate to apply my knowledge and experience to the field of nephrology, a core field for our business. Phosphate is the second most abundant mineral in the body after calcium and is also essential for the formation of bones and teeth.However, the worldwide research of mechanisms to regulated phosphate was far behind the research on calcium. I thought that presented an opportunity.
In 2000, while doing pathological research on hypophosphatemia (low phosphate in the blood), I was the first to discover the central role that fibroblast growth factor 23 played in regulating phosphate levels in the blood. However,since FGF23 is a hormone that reduces phosphate produced in bone cells, this did not directly lead to the creation of a treatment. However, suppressing FGF23 allowed vitamin D levels to rise, and that could reduce the amount of phosphate the kidney excretes. I thought this could lead to a way to treat XLH, so I continued researching.
The challenge was to find a way to suppress the FGF23.Using Kirin’s human antibody producing technology, we finally produced the fully human antibody KRN23 that acts to suppress FGF23.

Approved in Europe and the United States ahead of Japan

KRN23 became a promising candidate for XLH treatment, and clinical development began in 2006 in the United States.Since XLH is a rare disease, progress was slow in the early phase of the study because of the limited number of patients. However, KRN23 development quickly accelerated after we partnered with Ultragenyx Pharmaceutical, which specializes in developing treatments for rare diseases.
The European Commission granted conditional marketing authorization for KRN23 in February 2018, and the U.S. Food and Drug Administration approved it for sale in April that year. It became the world’s first drug with an indication for treatment of XLH.
We are aiming to receive approval for KRN23 in Japan and across Asia and Oceania. As a pharmaceutical company ,we will pursue our mission to discover revolutionary new drugs and ensure a steady supply of treatments that help resolve social issues in the health field, contribute to the quality of life of people around the world, and support sustainable growth for the company. 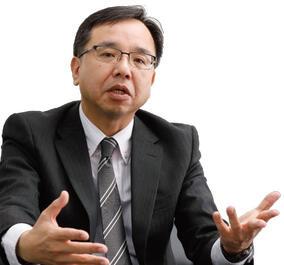 Dr. Yamashita joined Kirin Brewery in 1987 where he researched bone metabolism while working in the former Pharmaceutical Laboratory, Kirin Brewery. In 2000, he was the first to identify the fibroblast growth factor 23 (FGF23) biomolecule’s role as a bone phosphate regulator, which led to the discovery of KRN23 as an anti-FGF23 antibody.