To Our StakeholdersAiming to Be a Company That Is Completely Trusted

To achieve sustained gains in corporate value over the medium to long term, it is necessary to solidify the Company’s foundation for the creation of value and the implementation of strategies. In addition, for the Kirin Group, which has announced its commitment to CSV, it is extremely important to earn the trust of a variety of stakeholders. This is our approach to the implementation of initiatives targeting ESG issues.*1
First, we will further strengthen corporate governance. At Kirin Holdings, in fiscal 2016 we moved to a system under which seven of 14 Board members, including Audit & Supervisory Board Members, are outside officers (of whom six are independent officers). The Chairman of the Board of Directors is selected from among the outside officers. In addition, we merged two committees to form the Nomination and Remuneration Advisory Committee, for which three of the five members are outside directors, and the chairman is an outside director. At meetings of the Board of Directors, discussions have become more dynamic, and the management supervision has been significantly enhanced. I believe that these changes will lead to improved business performance in the future. Furthermore, in fiscal 2017, to provide incentives for both achieving annual plans and increasing corporate value over the medium to long term, we revised the remuneration system for officers. This will enhance performance and further promote a sense of sharing value with the shareholders through commitment to the achievement of management plans by executives, including the president.

No matter how accurate they are, a company’s visions and strategies are implemented by human resources and organizations. If the company does not have a system that fully draws out their capabilities, then I believe that its visions and strategies will not be of any use. The Kirin Group aims to be a “rigorous, warm company.” In other words, we aim to be a company that is a meritocracy and that establishes an environment in which employees work energetically and can grow through their work while continually taking on the challenge of creating new value. To that end, on the basis of leadership reform, we will enhance our implementation of human resource allocation and development as well as working styles. In addition, to create new value, it is important to support diversity and establish an organizational culture that fully leverages the power of diversity. Moving forward, we will aggressively implement initiatives in this area, centered on the promotion of opportunities for women.

For Kirin, which uses the bounty of nature to deliver products to consumers, it is essential to implement initiatives that address environmental problems. Countries around the world are working together to implement full-scale countermeasures to global warming, and I believe that the Kirin Group must work aggressively to make a contribution. As the first step, from 2017 we will introduce renewable energy on a scale that will place Kirin among the top companies in Japan in terms of the domestic use of such energy. I think that this measure will also contribute to long-term cost optimization.
Moving forward, we will continue aiming toward the realization of a society that is based on 100% recycling, and to that end we will implement a range of initiatives.

We have implemented aggressive measures for shareholders’ returns, such as through stable dividends and own stock repurchases. Moving forward, we will continue to steadily implement a dividend payout ratio on normalized EPS*2 of at least 30%. In this way, we will pass on to shareholders the fruits of the Group’s growth in an appropriate, timely manner.
Of course, shareholder value is not something that can be increased simply through dividends, and accordingly we will further advance management that reflects consideration for the stock price. Through the revision of the remuneration system for officers, we have introduced a system for the direct granting of shares to officers and have further reinforced the link between remuneration and results.

The Kirin Group aims to be a group that is highly regarded and trusted by society and is considered by all stakeholders, including shareholders, employees, and suppliers, to have a valuable presence and to be indispensable to society.
Moving forward, we will do our utmost to extend the favorable performance in fiscal 2016, and accordingly I would like to ask for the continued support of our stakeholders.

I joined Kirin Brewery in 1977. Working principally in the Corporate Planning Department, I gained experience in Japanese beer business branches and in business development units, both in Japan and in Los Angeles. I studied at the Cornell University School of Hotel Administration and worked in the Kirin Group’s hotel business. I also worked in PR at Kirin and served as vice president of San Miguel Corporation, in the Philippines. I became a managing director of Kirin Holdings in 2010, and in 2012, I was appointed as president & CEO of Kirin Brewery. In 2013, I became president & CEO of Kirin Company, and I was subsequently appointed as president & CEO of Kirin Holdings in March 2015. 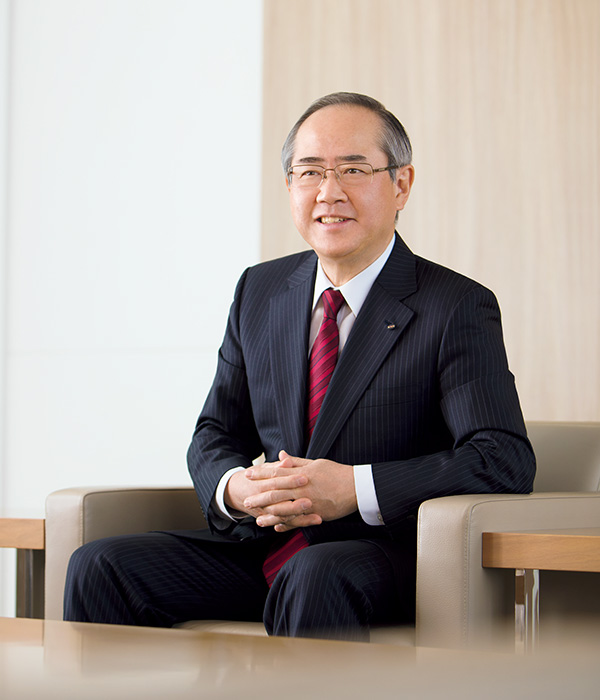