Interview with an Outside Director

I think that we outside directors
should not only offer sideline support
but should also fulfill our role in
providing monitoring functions in order
to aid the Kirin Group in achieving
growth led by the creation of value. 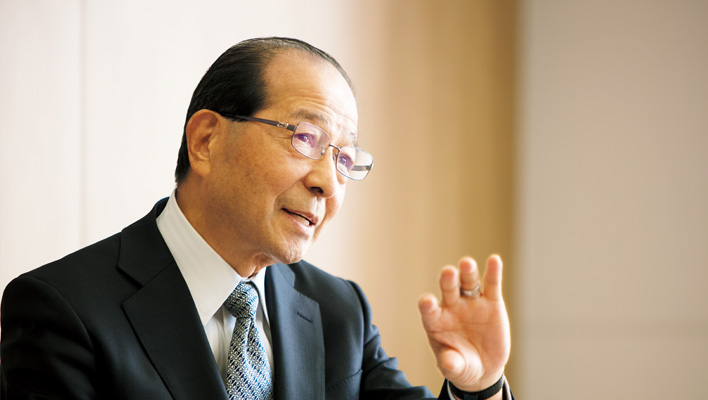 Outside Director Toshio Arima assumed the position of Chairman of the Board at Kirin Holdings in April 2016. We asked Mr. Arima for his honest opinions regarding the Company’s corporate governance system.

QWhat is your evaluation of Kirin Holdings’ corporate governance system?
AKirin Holdings has been rapidly reinforcing its corporate governance system, particularly in the past few years. Today, around half of the members of the Board of Directors are outside directors. In addition, I received the important post of Chairman of the Board in 2016. Other reinforcement measures included unifying the Nomination Advisory Committee and the Remuneration Advisory Committee. The Company also revised its officer remuneration system to provide officers with more incentive to pursue medium- to long-term improvements incorporate value through ongoing increases in yearly performance, as opposed to simply focusing on single-year business plans. Thanks to these efforts, I would say that Kirin Holdings’

QIs this reinforced corporate governance system functioning effectively?
AOne of the strengths of Kirin Holdings can be found in its proactive stance toward boosting the effectiveness of its corporate governance system.
This stance is exemplified by the Company’s outside director system. Rather than being content with bringing its system in line with Japan’s Corporate Governance Code, I strongly believe that Kirin is committed to making its system truly effective. The Kirin Group will have to move forward with globalization and the creation of new value if it hopes to achieve sustained growth. This endeavor, however, will entail exposure to various risks. Growing while minimizing the potential impacts of these risks will require management to incorporate outside insight and diverse perspectives, and I feel that Kirin Holdings is well aware of this fact.
Outside directors must have an in-depth understanding of executive management policies and the circumstances surrounding front-line operations in order to effectively fulfill their role. To help foster such an understanding, we had the Company start holding study meetings for outside directors and joint briefings with President Isozaki last year. We also have the Company provide us with various opportunities to monitor front-line operations in Japan and overseas. As a result of these measures, outside directors have been actively participating in meetings of the Board of Directors, and unique and diverse perspectives from outside directors have been increasingly incorporated into management. Specifically, such perspectives have been utilized in defining the desired function of the Board of Directors, in conducting negotiations related to M&A activities, and in monitoring management.

QI assume that, given the time restrictions placed on outside directors, efficient Board of Directors proceedings are important. What are your thoughts on this matter?
AYou are exactly right. After taking up the position of Chairman of the Board last year, I have continued to discuss, in depth, the subject of efficiency in the proceedings of Kirin Holdings’ Board of Directors with President Isozaki.
Previously, a large amount of time was devoted to issues related to individual subsidiaries. Beginning this year, however, we have begun delegating responsibility regarding such issues to the executive branch and to operating companies whenever possible. This has enabled Kirin Holdings’ Board of Directors to focus more on discussions of overarching, Groupwide strategies.

QI understand that you are a member of the United Nations Global Compact Board. From that standpoint, how do you view the Kirin Group’s CSV management?
AThe Kirin Group positions CSV as the foundation for its management, and I think that this stance makes the Group a forerunner in terms of CSV management in Japan. Moreover, I feel that there is a high degree of understanding with regard to concepts such as shared value and ESG, which exceed the traditional boundaries of CSR. What I would like o commend the most is the fact that the Group based its business plan on the three social issues of health and well-being, community engagement, and the environment. The process of incorporating these ideas into the business plans of Group companies is the very essence of CSV management.
Looking ahead, the Kirin Group will have to overcome the challenge of effectively explaining how its initiatives for addressing social issues will contribute to higher economic value in addition to improvements to social value. Good examples of initiatives that realize increases in both economic and social value have begun to generate results. 47 Todofuken no Ichiban Shibori is one such example. I hope that the Group will continue to accelerate and expand these initiatives into the future.
Kirin was also quick to respond to the United Nations’ SDGs. The SDG Industry Matrix is a set of industry-specific documents showcasing examples of initiatives from numerous global companies created by the UN Global Compact to provide guidelines for corporate action related to the SDGs. The Kirin Group began referencing these documents even prior to the release of their Japanese translations. In the future, I look forward to seeing Kirin grow into the type of major global company that can be introduced in the SDG Industry Matrix.

QIn closing, could you explain what you hope to accomplish as the Chairman of the Board?
AIf I may make a soccer analogy, a good referee, with mutual respect between the players, recognizing them as the stars of the event, manages the game to guarantee high quality. I aim to play this type of role as the Chairman of the Board.
The Kirin Group has numerous strengths. It is my hope that the Group will be able to fully leverage these strengths into the future in order to improve its economic and social value and thereby achieve growth led by the creation of value.
In supporting these efforts, I think that we outside directors should not only offer sideline support but should also fulfill our role in providing monitoring functions.

2011 Outside Director of the Company (current position)