In the Kirin Group 2016–2018 Medium-Term Business Plan (2016 MTBP), a ROE of 15% or more and a normalized EPS compound average growth rate of 6% or more have been set as quantitative targets and key indicators for measuring the revitalization of the Kirin Group through structural reforms. In addition, the reference value (guidance) at the time the quantitative targets are achieved is indicated by consolidated normalized operating profit. We are managing our business to achieve the three-year medium-term targets by achieving the profit plan for each single fiscal year.
Profit guidance seeks to achieve the plan by attaining the 2018 guidance (2020 guidance for the Pharmaceuticals and Bio-chemicals Businesses) and cost cut targets established for each business. Kirin will achieve the ROE target by raising the margin of profit attributable to owners of the parent through higher profitability of each business. At the same time, Kirin Holdings, Group headquarters, is selling assets and optimizing its business portfolio to generate free cash flow of over ¥260.0 billion, the three-year target. Based on a consolidated payout ratio of 30% or more of normalized EPS, free cash flow will be set aside to provide stable shareholder returns and to repay interest-bearing debt. This will increase financial flexibility and provide for future growth investment.

In fiscal 2017, the second year of the 2016 MTBP, Kirin Holdings managed its businesses based on the above-mentioned MTBP policy and achieved better-than-expected results. Each business steadily improved profitability to achieve guidance for 2018 (or 2020), cost cut measures steadily produced results for the entire Group, and consolidated normalized operating profit increased ¥12.3 billion (up 6.8%) from the previous year to ¥194.3 billion. Cost cut initiatives achieved the 2016 MTBP target of ¥30.0 billion one year ahead of schedule. In addition to deciding to sell Brasil Kirin, which is positioned as a low-profit business, and completing the share transfer in May, the Group's structural reforms progressed faster than the 2016 MTBP originally expected thanks to management measures to liquidate non-core assets including property, plant and equipment.
These measures generated free cash flow of ¥284.9 billion, achieving our three-year free cash flow generation target one year ahead of schedule. The repayment of interest-bearing debt significantly exceeded the MTBP target, raised the equity level by increasing profits, and sufficiently enhanced our financial flexibility.

1) Consolidated statement of profit or loss

Consolidated revenue including liquor taxes increased by ¥9.8 billion (up 0.5%) to ¥1,863.7 billion (an increase of ¥16.4 billion [up 1.1%] to ¥1,574.3 billion excluding liquor taxes). Broken down by segment, revenue of Japan Integrated Beverages decreased by ¥10.6 billion, Overseas Integrated Beverages increased by ¥20.1 billion, and Pharmaceuticals and Bio-chemicals increased by ¥5.3 billion. However, Overseas Integrated Beverages was affected by foreign exchange rates (+¥20.1 billion), as well as a revenue increase of a soft drinks business subsidiary in the United States due to its acquisition of a manufacturing and sales business in the territories adjacent to its own.
In Japan Integrated Beverages, Kirin Brewery revenue declined by ¥8.4 billion (a ¥1.0 billion decrease excluding liquor taxes) due to declining sales volume for beer products (down 4.2%), while Kirin Beverage revenue decreased by ¥6.8 billion due to declining sales volume for non-alcoholic beverages (down 2.2%) as a whole.
In Overseas Integrated Beverages, Lion revenue decreased by ¥8.9 billion. Lion Beer, Spirits, and Wine business sales volume declined (down 10.5%) due to the conclusion of the ABI brand distribution agreement in Australia in September 2016, and declining sales volumes due to the sale of the Australian wine business to focus its resources on the beer business. Revenue declined ¥15.1 billion, which includes the impact of the foreign exchange rate on consolidation of +¥11.5 billion. On the other hand, if we exclude the impact of the ABI brand loss and wine business divestiture, revenue remained in line with that of the previous fiscal year on a local currency basis. In the Lion Dairy and Drinks business, sales volume declined (down 3.0%) in the juice and drinks category due to a surge in orange juice prices that resulted in a decrease in overall sales volume. Revenue increased by ¥6.1 billion, which included the impact of the foreign exchange rate on consolidation of +¥9.0 billion. Even including the ¥(1.8) billion foreign currency effect, Myanmar Brewery revenue increased by ¥3.0 billion thanks to higher sales volume (up 17.1%), as well as the effects of price hikes carried out in fiscal 2016 and 2017.
Kyowa Hakko Kirin's Pharmaceuticals and Bio-chemicals businesses recorded a revenue increase of ¥5.3 billion thanks to a significant boost from higher technology licensing revenue in the overseas market in the Pharmaceuticals Business.

Consolidated normalized operating profit increased by ¥12.3 billion, and Group profitability improved as the profit growth rate (6.8%) exceeded the revenue growth rate. Operating profit margin to revenue improved from 9.8% in fiscal 2016 to 10.4% (revenue excluding liquor tax rose from 11.7% to 12.3%). The status of each business is as follows.

Kyowa Hakko Kirin's normalized operating profit increased by ¥10.7 billion (up 20.9%) to ¥62.2 billion. In the Pharmaceuticals Business, profits increased ¥9.1 billion due to higher gross profit from higher technology licensing revenue in the overseas business, and a decrease in R&D expenses. In the Bio-chemicals Business, profit rose by ¥1.6 billion due to a more highly profitable sales mix.

Profit attributable to owners of the parent

Equity in earnings of affiliates increased by ¥9.6 billion due to strong performance of San Miguel Beer, as well as an increase in normalized operating profit. Furthermore, structural reforms progressed at a faster pace than initially anticipated due to the sale of Brasil Kirin, which was positioned as a low-profit business, and the liquidation of non-core assets. Profit from discontinued operations increased by ¥76.8 billion due to tax effects associated with the transfer of Brasil Kirin shares, resulting in a ¥93.1 billion rise in profit.
The margin of profit attributable to owners of the parent in fiscal 2017 reached 13.0% due to a one-time increase in earnings on progress made in structural reforms, but the improved profitability for each business excluding this effect was nearly in line with progress made in the 2016 MTBP.
The tax rate in fiscal 2017 was 22.2%. This was attributable to the effects of non-amortization of goodwill and brands following the adoption of IFRS, a reduction in the statutory tax rate in Japan, an increase in investment profit accounted for by the equity method, and other factors. There were no tax effects associated with the sale of Brasil Kirin included in profit from discontinued operations. 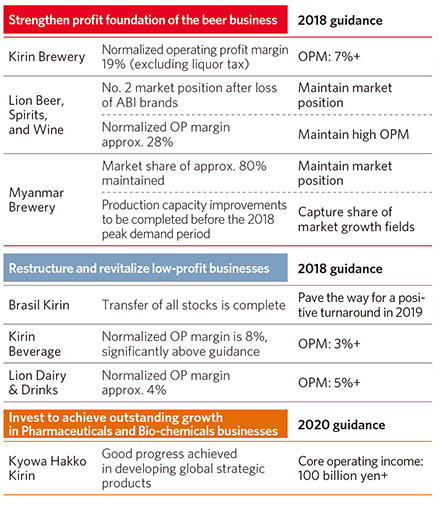 Operating cash flow was ¥221.7 billion, investing cash flow came to ¥63.2 billion, and free cash flow was ¥284.9 billion. This was attributable to the improved profitability of each business, progress made in structural reforms including the sale of Brasil Kirin, and the liquidation of non-core assets.
The Company allocated ¥45.9 billion for shareholder returns (dividends) based on a consolidated payout ratio of 30% or more of normalized EPS, and ¥147.3 billion for interest-bearing debt repayment. As a result, the repayment of interest-bearing debt over the two-year period came to ¥258.3 billion, exceeding the target of ¥135.0 billion in the 2016 MTBP. Interest-bearing debt, as of the end of fiscal 2017, was ¥486.5 billion.

Total assets decreased ¥23.7 billion to ¥2,399.1 billion (compared with ¥2,422.8 billion at the end of the previous fiscal year). Property, plant and equipment decreased ¥82.0 billion on the sale of Brasil Kirin, which was a wholly owned subsidiary, as well as the reduction of assets by selling off the brewery site and other property, plant and equipment. Because of that and other factors, non-current assets decreased by about ¥120 billion. This amount included over ¥40 billion that had been transferred to current assets due to the transfer of Kirin Amgen shares (gain on sale of equity-accounted investees), which was recorded in non-current assets. The shares were transferred in the first quarter of 2018. Capital expenditures came to ¥85.9 billion, which was lower than the ¥89.9 billion in fiscal 2016, and the timing and amount of investments for nonessential and nonurgent items were reviewed and kept within plan.
As mentioned above, revenue increased ¥9.8 billion, but since it was lower than the 2016 MTBP expectation based on J-GAAP, the asset turnover ratio remained at 0.77. Factors behind the decline in revenue compared to the 2016 MTBP included a deduction of sales promotion expenses linked to sales from revenue due to the adoption of IFRS from fiscal 2017, the sell-off of Brasil Kirin, the conclusion of ABI brand distribution in Australia by the Lion Beer, Spirits, and Wine Business, and a decrease in domestic beer product sales volume.

Profit of ¥242.1 billion, which increased significantly due to the improvement of profitability and structural reforms, contributed to the increase in retained earnings, and total equity (excluding non-controlling interests and treasury shares) increased ¥251.9 billion to ¥955.9 billion (¥704.0 billion as of the end of fiscal 2016).
Financial leverage declined to 2.9 and the debt-equity ratio dropped to 0.51 (1.14 at the end of fiscal 2015) due to progress in reducing assets and repayment of interest-bearing debt, which exceeded the target of the 2016 MTBP, and financial flexibility improved.

ROE was 29.1% due to a margin of profit attributable to owners of the parent of 13.0%, including one-time factors. Although adjustments excluding non-recurring items (profit from discontinued operations due to the transfer of Brasil Kirin shares, and other operating income and expense after taxes and other adjustments) were made, normalized EPS increased ¥12 (8.6%) to ¥151.
Shareholder returns (dividends) were ¥46, an increase of ¥7 per share, based on a consolidated payout ratio of 30% or more for normalized EPS. We therefore expect to allocate ¥54.0 billion from free cash flow to dividends in fiscal 2018. However, due to the expected cash inflow from the transfer of Kirin Amgen shares, we decided to conduct an own-share repurchase with a maximum of ¥100.0 billion as an additional shareholder return.

In fiscal 2018, we expect an operating cash flow of ¥230.0 billion. This amount will be used for investment cash flow, repayment of interest-bearing debt with repayment deadlines, and shareholder returns, including the above-mentioned own-share repurchase.
Regarding capital expenditures, we will allocate resources according to the positioning of each business while limiting the total amount based on the 2016 MTBP financial strategy. In 2018, we plan ¥98.0 billion in capital expenditures, but expect a positive investment cash flow of ¥10.0 billion, which includes the cash inflow from the sell-off of Kirin Amgen shares. We expect interest-bearing debt repayment of ¥80.0 billion, and shareholder returns of ¥154.0 billion, which include dividends of ¥54.0 billion and the own-share repurchase of ¥100.0 billion. As a result, an ROE of 16.0% is forecasted.
Profit attributable to owners of the parent is expected to decline due to a decrease in profit from discontinued operations, which increased in fiscal 2017 on the sale of Brasil Kirin. However, the expected decline of both revenue and normalized operating profit in Pharmaceuticals and Bio-chemicals should be covered by increases in other businesses.
Our policy is to maintain an appropriate capital structure considering the balance between cost of capital and financial flexibility while enhancing our capacity to generate cash through profit growth.

Our cash allocation policy after FY 2019 will be determined by the financial strategy of the next medium-term business plan, but our priority will be to first invest in growth opportunities, and then return profits to shareholders after repaying interest-bearing debt with repayment deadlines. As growth investment targets, we will continue to explore opportunities in Southeast Asia, as well as the area of "health and well-being" as future drivers of growth. We will also take a disciplined approach to future investments.
In the years ahead, we will boost investment in human capital, brands, R&D, and supply chain and IT, which are intangible assets that support the Group's sustainable growth.