We are refining
our strengths and accelerating
our medium to long-term
growth strategy. 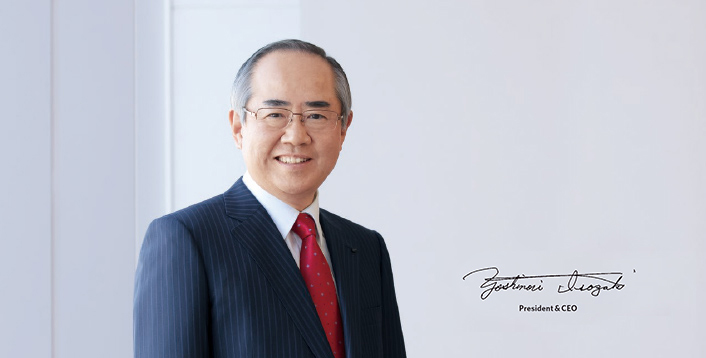 We put the Kirin Group 2016–2018 Medium-Term Business Plan (16MTBP), into action in 2016 as the first stage of our Long-Term Management Vision, "New KV2021," Accordingly, we are reinforcing our beer business earnings base, pursuing structural reform of low-profit businesses, and leaping forward in our pharmaceuticals and bio-chemicals businesses. As in these three core initiatives, we are making every effort to restructure and revitalize Kirin, group-wide.
Over the past two years our reforms of low-profit businesses have shown impressive results. In 2017 we also made great strides in reinforcing our domestic beer business earnings base. Actions like these, along with liquidation of non-core assets and other measures, have brought structural reform to the group at a brisk pace. As a result we achieved three-year free cash flow targets laid out in the 16MTBP a year early. The year 2017 also saw the Group's profits rise to record levels. We are pleased to report a deepening group-wide commitment to carrying out our plans.
In 2018, the final year of the 16MTBP, we will keep moving with urgency to achieve core business profit growth. We are confident that we will reach our quantitative targets and guidance. In addition, we have fortified the Group's management foundation with a view toward maximizing shareholder value based on further progress in corporate governance and strengthened CSV management based on our CSV Commitment. Through these and other measures we have gained a solid footing to realize New KV2021. Sustainable growth is our goal over the next three years as we head toward the next MTBP, scheduled. 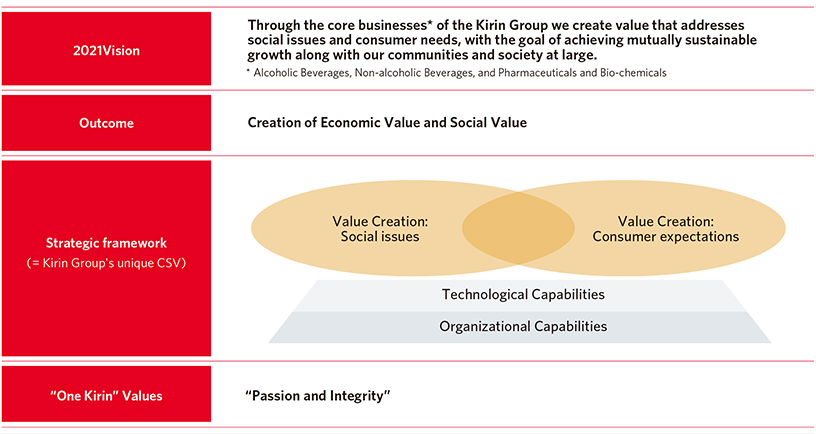 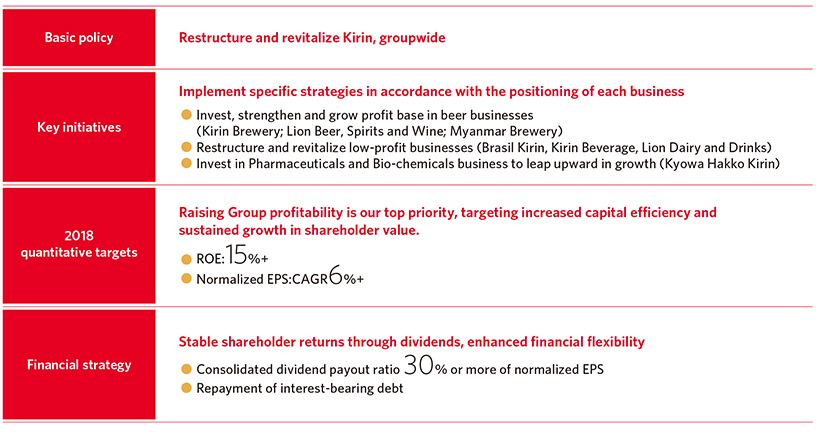 While maintaining this swift progress in structural reform, we are intent upon achieving our quantitative targets and profit guidance. At the same time we will accelerate implementation of measures with a view toward our next medium-term plan and beyond. Realizing profit growth in our existing businesses is our top priority. 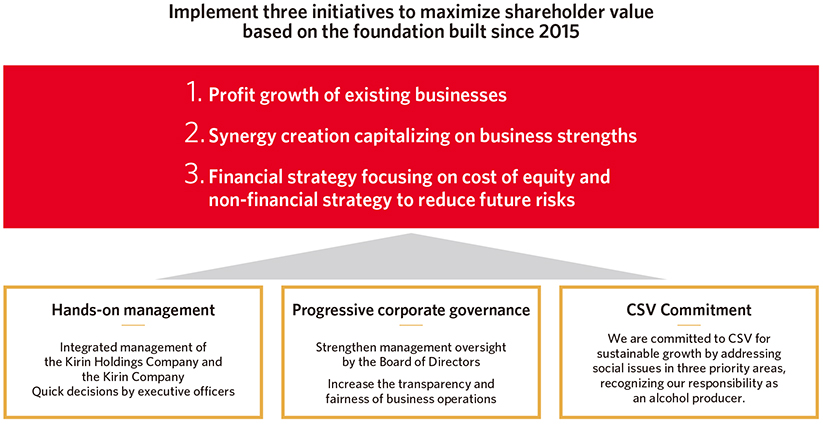 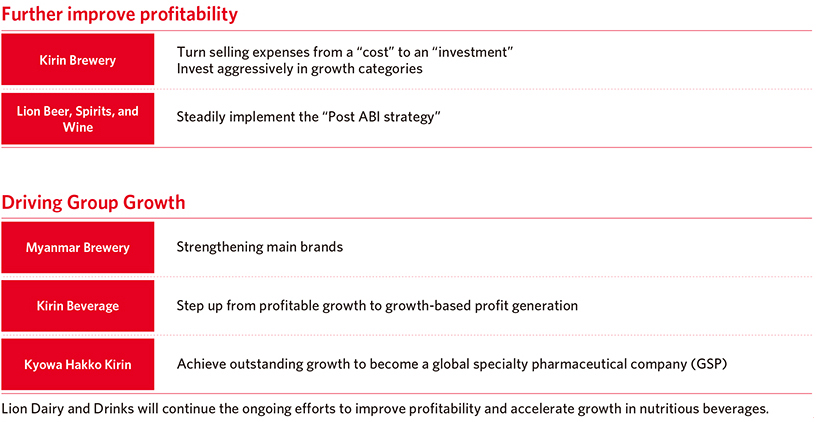 Among our existing businesses, we are seeking new heights of profitability in Kirin Brewery and Lion Beer, Spirits, and Wine business (Oceania). It is generally recognized that beer markets in Japan and other industrialized nations in North America, Europe, and other regions are becoming ever more mature.
Domestic beer consumption has dropped one fourth from its peak. Against Japan's background of declining fertility and an aging population we foresee further reduction in consumption ahead. Over the medium to long term it is unrealistic to hope for unit growth. Aggressive price competition has continued for some time but the revised Liquor Tax Law and related legislation of June 2017 established the Guidelines on Fair Liquor Trade, which offers opportunities for the beer industry to move decisively toward focusing on profitability.
In this reshaped business environment, Kirin Brewery is among the first to shift its orientation away from price, putting even greater emphasis on brands than we have in the past. Specifically, in January 2017, preceding this regulatory reform, we slashed sales promotion costs, while reclassifying marketing cost as an investment in brands, which are intangible assets. This allows us to allocate resources to branding by launching products with fresh appeal and introducing innovations in places where alcoholic beverages are served or sold.
In July 2017 for example, we revamped Ichiban Shibori with an improved flavor, which we communicated through an ad campaign, winning the hearts of a large cross-section of beer lovers. The rate of sales growth surpassed that of the market itself while enhancing the attractiveness of the beer category as a whole. We also expanded our craft beer business to revitalize the market by further boosting beer's appeal.
Going forward we will further narrow down the products in which we invest, aiming to build strong brands supported by long-term fans. At the same time, we will invest in the growth categories of craft beer and ready-to-drink (RTD) pre-mixed cocktails. Through these measures we intend to stimulate new growth for Kirin Brewery and boost profitability over the medium term to a level comparable to global competitors.

Regarding Lion Beer, Spirits, and Wine business, we are regaining profit following conclusion of distribution agreement with Anheuser-Busch InBev (ABI) in Australia. Specifically, we are leveraging our strengths by boosting the brand equity of our main brands and expanding craft beer sales. In 2018 we will ramp up these efforts to achieve profitability levels seen when the ABI agreement was in force.
We are pursuing a growth strategy for Myanmar Brewery, Kirin Beverages, and Kyowa Hakko Kirin, as these are the main drivers of Group growth. In the case of Myanmar Brewery, we are building the brewer's main brand, Myanmar Beer, and expanding production facilities and capacity to support long-term growth. Over the past two years we have greatly improved the profitability of Kirin Beverages by dropping unprofitable operations and cutting supply chain costs. 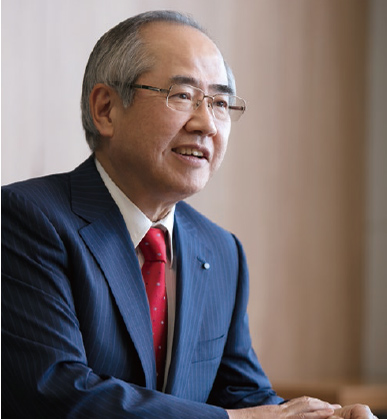 Going forward we are taking the next step up in our strategy, shifting from profitable growth to growth-based profit generation. By developing a robust brand portfolio and creating value beyond existing domains, we aim to raise our normalized operating profit margin to 10% by the year 2021.
In the Kyowa Hakko Kirin pharmaceuticals and bio-chemicals business we are making steady progress with development of our global strategic products, KRN23 (Burosumab) and KW-0761 (Mogamulizumab). In February 2018 the European Medicines Agency (EMA) granted Conditional Marketing Authorisation to KRN23. Having obtained FDA marketing approval in April 2018, we plan to launch KRN23 in both the U.S. and Europe within the year.
Progressing favorably with its five-year plan, Kyowa Hakko Kirin is enhancing its marketing capabilities and other aspects of its business in addition to developing global strategic products. Advancing steadily, KHK drives the Kirin Group's medium- to long-term growth as it makes the leap to become a global specialty pharmaceutical company (GSP). 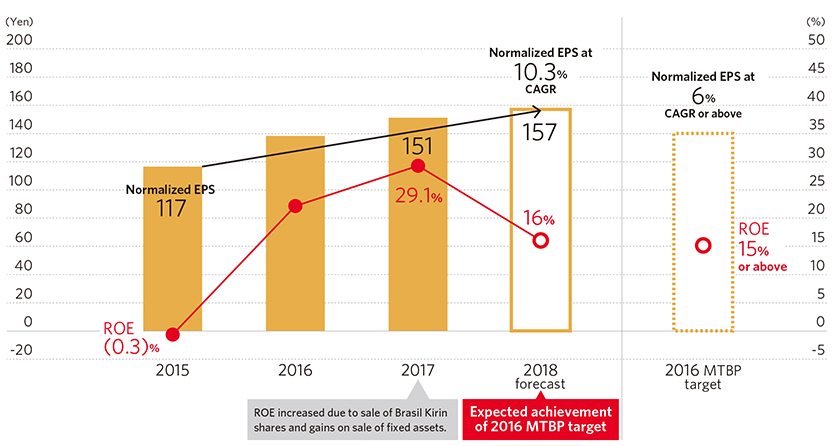 Seeking medium- to long-term growth in the years ahead, we will prioritize profitable growth of our existing businesses, while accelerating our shift to CSV as the core of our management. CSV management is key to raising corporate value and attaining sustainable growth. While fulfilling our responsibility as an alcohol producer, we create value by addressing social issues in the key areas of health and well-being, community engagement, and the environment.
We follow two policies to further CSV management and develop businesses, products and services that address customers' latent needs and have a positive impact on society.
The first policy is to strengthen management's intangible assets: human resources, brands, R&D, and supply chain and IT. These are assets that the Group has gained over the years in response to changes in the business environment. Strengthening our human resources is of particular importance as human resources are our engine for growth.
To enhance diversity in human resources and organizational structure, we offer not only entry-level positions, but also an increasing number of mid-career positions to attract candidates with valuable experience and expertise. To accelerate workstyle reform we are cultivating an environment that encourages all employees to develop and use their full potential.
With human resources as our core growth driver, we are reinforcing our business foundation in many ways. These include enhancing brand equity, R&D in our strong areas such as immunity, strengthening and optimizing the supply chain, which encompasses production technology and engineering technology, and applying information technology to enhance business processes.
The second policy is to develop new domains along with existing businesses to support Group growth over the next 10 years. Kirin Holdings will find opportunities for synergy among existing businesses while fostering new ventures in the areas of health and well-being, and pre-disease.
For the most part we can leverage the tangible and intangible assets the Group has cultivated over the decades to create new value without relying on major investments. When a challenge calls for supplementing the Group's own functionality and resources, we will use partnerships and M&A, evaluating each case on its own merits.
To promote sustainable growth of the Group and raise corporate value, we are continuing our rapid structural reform and pursuit of profit growth in existing businesses, while quickening the pace of innovation and creating new value by putting CSV management into practice.
Moving forward, we will exercise and extend our full performance potential, always striving to be worthy of the trust and support of our stakeholders.

Mr. Isozaki was appointed chief executiveofficer and president of Kirin Holdings in2015. He has served as chief executive officerand president of Kirin Company Limited since2013. He previously held the positions of seniorexecutive officer and general manager ofcorporate planning at Kirin Holdings, directorof San Miguel Corporation, and others, havingjoined Kirin Beer in 1977.