The Kirin Group has been able to flexibly adapt to changes in society and the marketplace throughout its history. In the 1950s, when demand for beer was on the rise in Japan in tandem with the country’s rapid economic growth, Kirin Brewery Co., Ltd., succeeded in greatly expanding its beer production, sales, and shipments. By 1972, the company had secured a domestic market share of about 60% for Kirin brand beer, produced by its network of 12 breweries nationwide.Leveraging its ability to adapt and respond to new market trends and consumer needs, the Group established Kirin Beverage Company, Ltd., in 1963, which went on to expand the soft drink business. Then in 1972, the Group launched its whiskey business with the establishment of the forerunner to Kirin Distillery Co., Ltd. Later, the Kirin Group created its first long-term management vision in 1981, through which it setclear goals for continuous growth and proceeded to further diversify its business portfolio. Diversification included entry into the life sciences market, which was projected to grow over the medium and long terms, Kyowa Hakko Kirin Co., Ltd.(Current Kyowa Kirin Co., Ltd.), in 2008. Through this steady expansion, the Kirin Group has continued to offer new value to consumers while building a unique business portfolio spanning from beverages to pharmaceuticals. 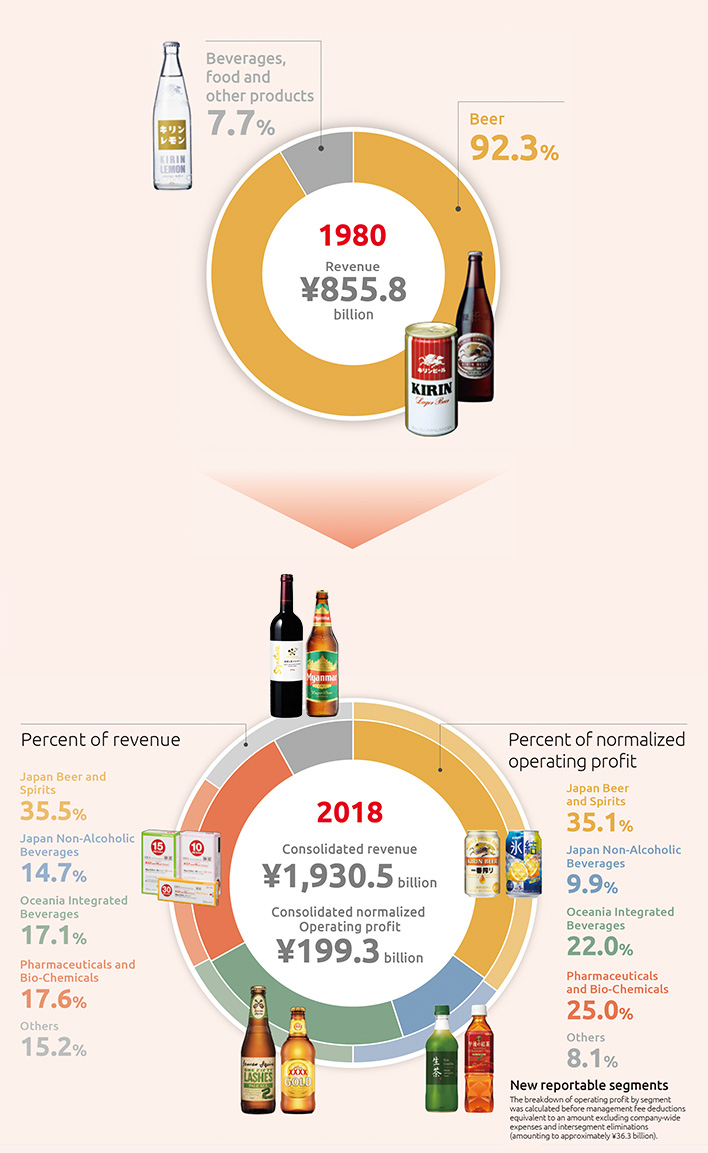 Japan Brewery Co., Ltd., was set up in 1885 by a number of foreign residents in Yokohama’s Yamate district, who envisioned great promise for a beer industry in Japan. To produce a genuine German-style beer that suited the tastes of Japanese consumers, they imported ingredients and brewing equipment from Germany and hired a qualified German brewmaster. 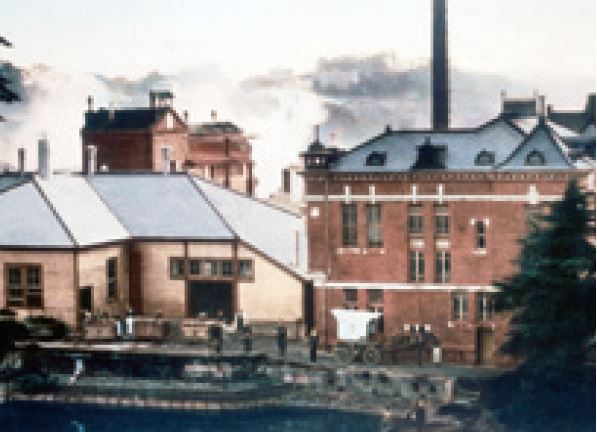 Kirin Beer was sold in 1888 with a label featuring a kirin, a legendary creature from ancient Chinese myths that is said to be a harbinger of good luck. When Japan’s beer industry entered a time of intense competition after the turn of the century, a group representing the Iwasaki family and the companies Mitsubishi and Meidi-Ya took over Japan Brewery and, while leaving the brewery’s operations intact, established Kirin Brewery Company in 1907. 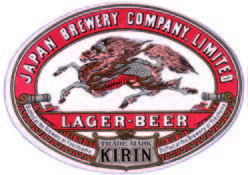 One year after the product launch, the original label of Kirin Beer was redesigned as this label in 1889, which features a larger image of the kirin. This label remains as the prototype for the Kirin Lager Beer label used today.

Drawing on bio-technology to break into the pharmaceutical business

In 1981, as part of its first long-term management vision,the Kirin Group set out to expand its business into style-,health-, and culture-related markets, and to contribute to people’s quality of life through its products, especially beer, in the lifestyle industry. By proactively promoting more diversified operations, the Group worked to create a more balanced business portfolio that was less reliant on its beer business, and forged a clear roadmap for improving profitability.
Guided by its long-term management vision, the Group stepped up efforts to launch new businesses utilizing its expertise in bio-technology, which was accumulated over many years in fermentation and cell cultivation operations. Leveraging those technological capabilities, the Group made advances in drug development, for which market growth was projected over the medium to long terms, and further expands into the life sciences market.

ESPO® launched as the first pharmaceutical product through a mutually beneficial partnership with U.S.-based Amgen

The Group made a major step forward in its efforts to expand the pharmaceutical business in 1984, when it formed a partnership with the U.S.-based biotech company Amgen, Inc., a venture firm at that time. Combining Amgen’s leading R&D capabilities with Kirin’s manufacturing techniques, the partnership succeeded in mass producing human erythropoietin. That led to the launch of their first pharmaceutical product in 1990: ESPO®, a treatment drug mainly for renalanemia. Incredibly, the drug was commercialized after only six years since forming the partnership, demonstrating Kirin’s entrepreneurial spirit and achievement for wellcollaborated work with the partner. On the momentum of that success, the Group continued to apply its bio-technologies in drug discovery and development. Its pharmaceutical business expanded as a result, and accounted for about 10% of consolidated operating profit in 2007.

In 2007, Kirin Pharma Co., Ltd., was established following the Group’s adoption of a pure holding company framework and establishment of Kirin Holdings Co., Ltd. Kirin Pharma then merged with Kyowa Hakko Kogyo Co., Ltd., in 2008 to form Kyowa Hakko Kirin Co., Ltd., and has been creating new pharmaceuticals by leveraging the synergies of the two companies’ antibody- and bio-related technologies. One of the accomplishments of this business came in2018 with the approval and launch of Crysvita, a treatment drug for X-linked hypophosphatemia, in Europe and the United States. Guided by Kirin Group Vision 2027, KyowaHakko Kirin is aiming to take the next major step toward becoming a global specialty pharmaceutical company, while the Group is working to cultivate new businesses bridging Pharmaceuticals and Food & Beverages.

Expanding globally through mergers and acquisitions

The Kirin Group has been expanding its operations internationally by actively pursuing mergers and acquisitions, focusing on Asia and Oceania in particular as key markets. Subsidiaries around the world are now helping drive the Group’s growth as a whole, including Lion Pty Ltd, an operator of alcoholic and non-alcoholic beverages businesses in Australia, and Myanmar Brewery Ltd. Meanwhile, Kyowa Kirin is striving to develop global pharmaceuticals by drawing on a wealth of bio-technologies.

The Kirin Group around the world 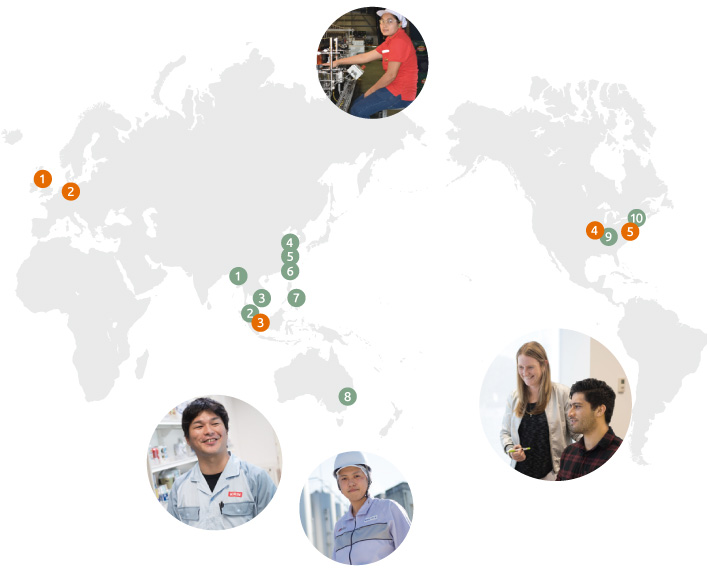